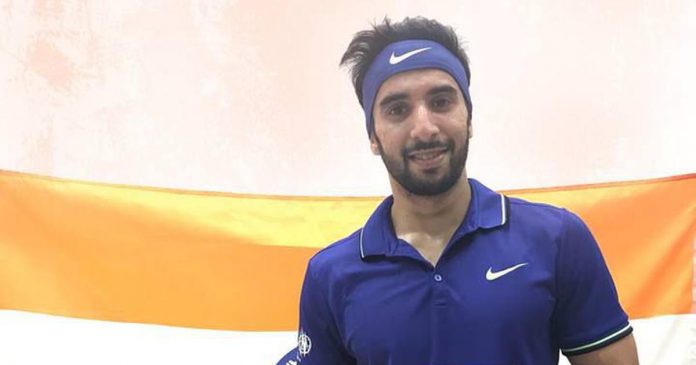 Vikram Malhotra: The rum that keeps getting better with time

Having beaten Mahesh Mangaonkar 3-11, 11-8, 6-11, 13-11, 11-4 in a keenly contested final at the North of Scotland Open squash tournament in 2017, the title match between the two forces of Indian squash at the HCL 75th National Squash Championship in Delhi was always expected to be a close one.

However, that it would be so close was hardly anticipated. It was only after Vikram Malhotra had the opportunity to win the final of the HCL 75th National Squash Championship with as many as three match balls, Mahesh converted the one that mattered the most to take the game and the trophy 11-4, 13-15, 11-2, 5-11, 15-13.

Malhotra has always been on or around the squash court since he was a kid.

“I believe I was the first person to win under 11, 13, 15, 17 and 19 nationals. So, competitiveness was always there. After my junior career, I went and played at Trinity College. Again, that’s very competitive squash. So, it was always hard but after that, I transitioned into the pro tour,” he said.

Law and sport generally don’t gel too well but Vikram somehow balanced both as he decided to move to the US. There at the Trinity College, he completed his undergraduate and Masters and had a thriving squash career alongside academics.

“I did my Masters in Public Policy and Law and I did my undergrad first from there. My dad is a lawyer and I found it quite interesting.” And squash was always on the cards. It was a better career move for me to go there (US). Whatever I have achieved, the titles I have won, it’s all been from there – training, coaching, sponsorship.”

His friends call him ‘rum’. When asked whether he considers himself light, dark or golden, the 29-year-old burst into laughter and stressed on the need to switch off from the sport.

“Whatever I can get on a Saturday (laughs). It’s just out of Vikram, so rum. But, I won’t put it past me unless it’s an off-season night or an off-season Saturday night; nothing in the season. But it’s important to relax and go away from the sport. I haven’t partied in six-seven months. But with all the travel, it’s important to go out with your friends. It keeps you fresh, keeps you hungry. You are doing the same thing over and over again. It’s too much.”

“Anything done in limitations is not bad and you want to enjoy an occasional glass of wine before you go to bed and you must go ahead with it.”

Vikram feels that diet and nutrition play a big role in bringing the best out of an athlete.

“Diet plays a huge role. Like for me, Herbal life and 24 Nutrition are my main sponsors. So whatever I have, everything is planned out and for me. My diet is very strict. I don’t have a lot of things that we love a lot in India. So it’s definitely restricted but I have chosen to be healthy.”

“I eat for function, not for taste.”

“It is important when you are playing and that’s just one of the sacrifices. A small sacrifice that you have to make while you’re playing but nutrition and supplementation are very important.”

His website says that his immediate goal is to break into the top 30. Despite being on the verge of 30 years of age and his highest PSA ranking being 55, his drive to keep pushing the limits still remains intact.

“I have won three events since September 2018. I had some injuries and that’s why I moved down in the rankings. I think in the last few months I have moved 30-40 spots back up. So I think it is a good trajectory. I should be in the fifties by January 2019.”

“I am currently 29 years old. You are playing at a high level till you are 35-36. It’s only my third year on tour. A lot of people talk about age but it’s more about how you maintain your body and if somebody has been going like this for the last 15 years, the body is going to be breaking down but it’s just my third season. The body feels fresh.”

Vikram Malhotra is mentored by former world number one Thierry Lincou. He feels that playing under the stewardship of a legend like Lincou is a big advantage.

“Any problem you have, he has sorted it for himself at some point. We all go through the same things – mental, physical, financial – whatever it is being an athlete. When I go to him, I ask questions and just keep quiet because whatever he says, you just have to take it in. He’s just not a coach but a mentor also- somebody I can pick up the phone and speak to, about not just squash but anything and that’s important.”

Speaking about the things that can be improved about squash in India he said, “I just think infrastructure needs to be better. Like in Mumbai, we are still dealing with the club system. We don’t have a facility where it’s just squash. Like Chennai has the National Squash Academy, I feel like if the federation and government can set up one facility like that in each metropolitan city so that it gives everybody in India an equal opportunity to do well.”

“I think if our national academy can have three branches, just think about the number of juniors that will come out of those programs. I hope that it happens someday.”

The Mumbai-born is open to coaching assignments in the future. He sees it as a way to give back to the sport.

“Maybe when I am done. I take a lot of pride in my country and we have juniors doing well all over the world. Given the right opportunity, the right amount of freedom, why not?”This article was originally posted on The Bridge website.