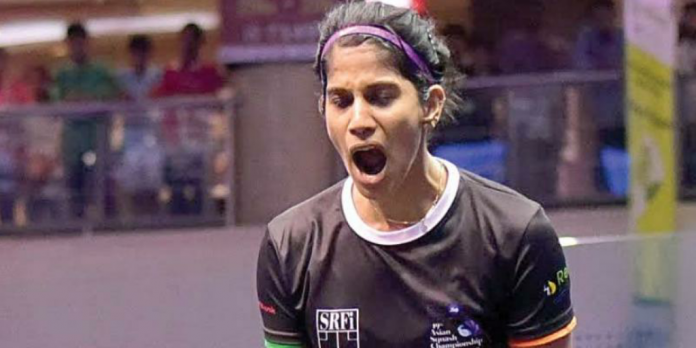 Not being in the olympics doesn’t make squash any lesser: joshna chinappa

Joshna Chinappa competed, if it can be called competition at all, against Sunidhi Pandey in the first round of the HCL 75th National Squash Championship and beat her 11-0, 11-2, 11-1 without literally even breaking a sweat. It was truly astounding to see her opponent clicking a selfie with her after losing the match. How can you beat someone whom you admire so much?

“To be honest, my first round matches are always comfortable. There are girls from around the area or close by, who have probably just started and manage to qualify. So usually the first round is a bit comfortable. It always gets harder from the next round onwards,” says Joshna.

“I feel like there is a lot of talent. They need to be encouraged; they need to have opportunities, places that they can play, have a good coach, trainer. They need access to these major, major things and of course you would then see a lot of improvement from round one itself,” she added.

Joshna, who went on to win the title, appreciated equal prize money being given to both men and women champions at the HCL 75th National Squash Championship.

“It’s good that they have made prize money equal. On most PSA events that we play in, the sponsors want to give equal prize money. I am all for equal prize money, and I think it’s great that HCL is doing it as well in the last couple of years.”

“Also, it is good that they are setting a standard that it’s the nationals and this is the best tournament in the country. We want to treat the men and women equally, and it’s great that it is that way.”

When asked about squash not being in the Olympics, Joshna said that though it is a disadvantage in certain aspects, she as a player can only focus on the things that are under her control.

“You know what, it doesn’t make my sport any lesser than any other sport because you are not in the Olympics. It’s a great sport. Squash is a much demanding sport than a lot of other sports, and it checks all the boxes to be an Olympic sport. But it is not there, so what?”

“Yes, we don’t get into TOPS easily or get the scholarship that we would have had access to if squash was in the Olympics, but we are just doing the best we can.”

“Personally, I am trying to do my best, work hard, focus on my matches internationally, try and get my ranking up, prepare myself to win medals at the big events for us which are the Commonwealth and Asian games and that’s all I can do. I believe people get inspired by that and they keep working hard and I hope corporates would come forward or we get financial aid for the kids to develop the sport further.”

Having had a taste of a spot in top 10 of the World Rankings in July 2016, Joshna is confident of repeating the feat but wants her game to speak for it.

“Obviously, top 10 is a very special place to be in. The best players in the world are there and I think it’s a big possibility, but I don’t like talking too much about the ranking. I want to get to it and try to get better as a squash player and try to improve where I can, on-court, off-court, with my diet, with my sleep. When all these things come together, that’s when you will see what you want. So I am just going to keep it at that.”

India is reportedly gunning for hosting the 2032 Olympics. The 32-year-old welcomes the idea but feels that it must only happen by the international standards.

“I think it is a possibility, but it has to be on a scale what the Olympics represent. Getting together all the best athletes and getting them comfortable. The village has to be great; the whole structure has to be top notch. Like Australia held the Commonwealth Games or like Scotland held the last Commonwealth Games, the standard and the quality is so high and obviously if India can match that and not compromise on a lot of things that do happen. Like when we had the Commonwealth Games in Delhi, there was so much of drama attached to it.”

“You can have an event that focuses only on the athletes, the sport, getting people to come to the arenas to watch, then it should happen; when you are capable of organising it and not just because you want to host an event.”

“Whenever you talk to athletes of sports other than cricket, there’s a feeling that cricket is like the elephant in the room that needs to be addressed. Being a game that the entire country is so obsessed about and that enjoys 90-95% of the Indian sports pie, it is interesting to get the perspective of what athletes think about the game.”

“To be honest, I don’t watch cricket, and that has nothing to with the fact that everyone (in cricket) makes more money than anybody else in this country. I don’t watch the sport, and I have never seen it since I was a child.”

“As far as cricket being the most popular sport is concerned, it’s just something I need to deal with. It’s always going to be like that. It’s like football is in England. You just accept it.”

“I just think that it would be nicer if other athletes in the country who do well in other sports are equally recognised. My thing is whatever cricket gets it’s fine, but other athletes should also be well supported, well compensated. They should be given the same recognition, the same attention in the media, the way cricket does.”

“Give everyone their equal due. If one sport is more popular that’s not in our hands; it’s just how people react to a particular sport but don’t take away someone else’s achievement in other sports as well be it wrestling, tennis, badminton or any other sport.”

Talking about her equation with Dipika Pallikal, Joshna said that things are perfectly fine between the two, “We are fine. We don’t have any issue as such. We just came of the Asian Games where we won silver together, and we had a great experience playing in the team together.”

“Dipika and I have reached a stage where we are pretty professional with each other. We get along more than a lot of other athletes in different sports (laughs).”

“Competing with each other, we both understand that when it comes to playing for India and winning medals for India, that’s the focus and we both back each other – if you play well I have to play well obviously. We both need to play well to win a medal, it’s as simple as that, and one can not have any issue with the other because the idea is to play good squash and that’s what we did at the Asian Games, and the results show.”

One hopes that she can continue for the longest that she can, but there will come the point when she decides to hang her boots. She hopes to give back to the sport after her playing career is over.

“My goal is to develop sports in the country. So I want to work with kids from all sections of society. I want the sport to have access to the grassroots and have a place where it’s multi-sport. I want sports to be in the kids’ lives in a major way, not just school and a bit of play time but to be a part of children’s lives. I hope, in some way, I can be a part of developing that,” she signed off.This article was originally posted on The Bridge website.