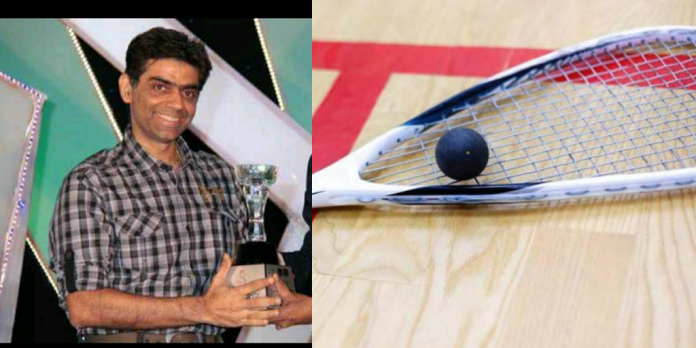 Manish Chotrani is 47 years old. At the age of 32, he was already a garment exporter but it was his love for squash that led him to bag the National Championship by beating a 23-year old opponent.

If you want someone to define the love of sports for you, Manish Chotrani is the right man. He has a thriving business, a talented son, Veer Chotrani, who at a young age is already taking giant steps in the junior squash circuit.

But Manish still keeps going on. He participates every year in the National Squash Championship and gives it his all. We caught up with him post this year’s National final. Here is a short interview.

Q:  After having almost won everything that is there to be won, what keeps you motivated to keep playing?

First, it was for me but now obviously I am happier for him and I hope he goes on and achieves much more.

Q: Veer naturally took up squash or you had some hand in that?

He has been there with me since the time he was born. He used to come to watch my matches. I picked up squash very late and I only became India number one after my marriage and when I became National champion again, he was just one year old.

He used to sit and watch all the matches with love from the age of one. So, he has been there at the squash courts effectively from the time has been born. So, he naturally took it up. He is very good according to me. It’s just that he needs to take his talent and actually fulfil it.

Q: I really appreciate your love for the game and I understand that it eggs you on to keep going. But is there any time frame that you have set in your mind or you want to just keep playing till you can?

There is no time frame. As I said, it is in the system now. So, if I don’t exercise, if I don’t play almost daily then I feel incomplete. You feel that the day has not gone down well.

Now it’s like you need to exercise to eat food. If I don’t exercise in the morning then I don’t feel like eating, I don’t work properly at the office, I am cranky, I am not happy with myself.

Well, we have to be optimistic. We wish that you come back next year to travel the short yet important distance from being runners-up to become the champion and for many more years to come.This article was originally posted on The Bridge website.