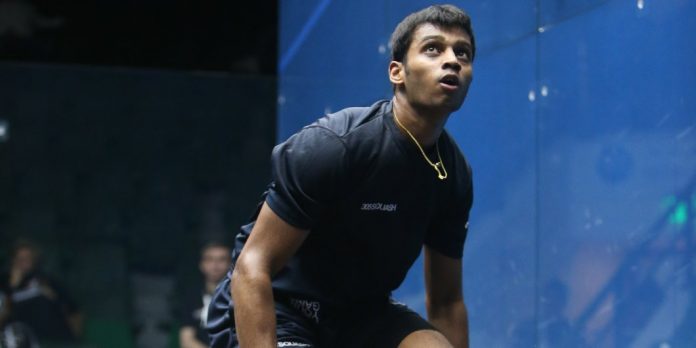 Those who witnessed the final between Mahesh Mangaonkar and Vikram Malhotra at the HCL 75th Squash National Championship will vouch for the fact that the match was as close as any that one can see.

Frankly speaking, with as many as three match balls to convert, it looked Vikram’s game for the taking but it was the resolve and determination of Mahesh that helped him be at it through that tough phase and emerge victorious.

“Vikram and I are almost the same in the world rankings. Right now, I am just one place above him. There is not much difference between us and it came down to who wanted it more badly because we were playing the same level of squash. The quality was the same.”

“Obviously, I am playing a different game. He plays a different game. So, it was just about who hangs in there a little bit more. It was a very tense and tough match. I had to dig real deep. Just happy that I won. I was match ball down but I did not let that affect my mind too much. I just took it in my stride,” said Mahesh after winning the final.

Mahesh Mangaonkar with his maiden National Championship title and Joshna Chinappa with her 16th National title .
At various points during the final, both players looked unimpressed with the umpiring decisions. However, Mangaonkar played it down after the match.

“It’s fine. I really don’t want to get into that. The referee is able to see better than me so I may be wrong. I might keep arguing but he can see it better than me so it’s better to move on. It’s something you can’t change so you have to live with it.”

Mangaonkar featured on all the banners and posters of the National Championship. Sometimes, all the hype around can affect you as a player and can burden your shoulders with expectations. But Mangaonkar carried it well and did not let the limelight hinder his game.

“The seeding did not really affect my mind too much. I just took everything as it came to me,” he said.

Mangaonkar has not looked back ever since he won the under 15 British Junior Open in 2009. The athlete says that he was always certain of what he wanted from squash.

“After I won the British Open, things got a bit more serious than what they were before. I started squash because I wanted to make this as my career I was very sure of what I wanted from this game. So that was definitely a big confidence boost for me.”

Mahesh has been making some changes in his game from a couple of years but he could not get the desired results. He has just started to reap the rewards of the hours of work that he has put in while training.

“I have been doing different things for the last four years now but things haven’t really turned around for me. I have just started seeing the difference in the last few months. I did a few changes in the summer but it still wasn’t working out but now I can see the difference because of the work I had put in before. Those things are now starting to pay off.”

“I can see few results coming in but it’s nothing like it’s a big jump or something like that. I am still learning and it’s still work in progress.”

The finalists pose for a photo at the end of HCL 75th Squash National Championships.

Conceded that the highest-ranked Indian player Saurav Ghosal did not take part in the Nationals but officially, Mangaonkar has become the National champion. He now has his eyes set on the CCI PSA.

“There is a local tournament in Mumbai next week so I’ll be competing in that in my hometown. After that, I play the CCI PSA. That’s a $70000 tournament. So I am playing that at the start of January.”This article was originally posted on The Bridge website.