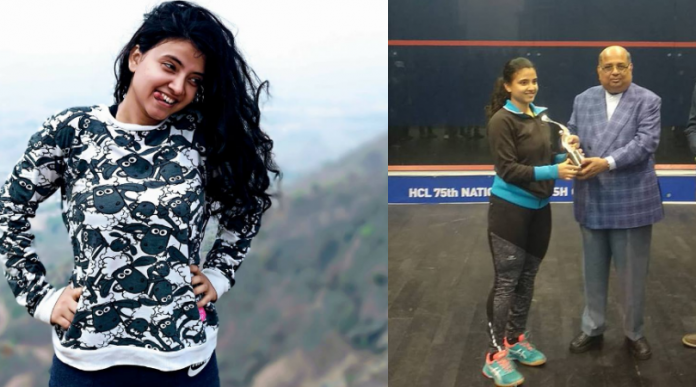 Urwashi Joshi: a champion in the making

Urwashi Joshi was the second seed at the HCL 75th National Squash Championship and rightly so. She made it to the finals and even stunned the senior pro Joshna Chinappa before ultimately losing the match.

As the two players moved out of the court, Joshna had camerapersons, a couple of journalists and the organizers all around her. She greeted them and had to pose for photos every now and them.

On the sidelines, was a heartbroken Urwashi just looking on. Soon, it was too much for her to take as she packed her kitbag and began moving out of the arena. She just wanted to run away from everything.

She hadn’t done much wrong. She had made it to the final and lost to a much better player, only after giving a tough fight. But it’s the way sportspersons are wired. They just can’t take defeats.

Here is an excerpt of our conversation with Urwashi Joshi, the runners-up at the 75th HCL National Squash Championship, right after the final:

Q: Tough luck on the match. You fought quite hard in the first round but what went off suddenly after that?

– I got a little tired in the second and third game. I just left the second game because it took me time to recover from the tiredness and then I came back in the third game but I could not move. I got stuck often and she (Joshna) took it away.

The silver lining was that you at least fought hard in the last game. It was not like you lost 11-2 or 11-3 which was commendable. I know it would have been a bad feeling but how did it exactly feel when all the photographers flocked Joshna and you were just sitting on the sidelines?

The winner takes all the attention. There is nothing wrong in that. She deserves that and she got it.

The finalists pose for a photo after the conclusion of HCL National Squash Championships.
Q: But does that motivate you for the next time?

– Yes, that motivates me to fight and get back.

In a way, you would have already known even before the tournament that in all probability, you would have to face Joshna in the finals if you make it. What did you picturise when you came to know your draw last night?

I knew it would be tough. I did not prepare like I have to play her. I prepared normally, just like I was playing any other player. It just went along, I did not think much about it.

A couple of times I felt that you had already lost the match in your mind before you actually lost the match. Given that you were the second seed, do you think you could have given it a bit more?

Yes, mentally I thought I could not take it and I was also very tired. The shots were not going and I couldn’t move fast enough.

Q: Do you think it has to do something with training or it was just a bad day?

– No, definitely it’s about training. I need to work very hard on my stamina and endurance.

Dipika Pallikal and Joshna Chinappa have been around for the longest time and they have served the country well. As much as we hope that they keep playing, there will come a time when they will fade away. Do you think you have the potential to fill in their boots?

Definitely, I think I can be there. There are more players like Sunayna Kuruvilla and Sachika Ingale. It would be a tough match among us but I would see myself in the top two.

Q: Now as you will try to break through in the professional circuit from the next year, what is the immediate goal?

– Obviously, first of all, I want to qualify and then reach the main draw in the PSA matches. The next thing would be to reach the top 70 and then the top 50.

Q: What’s your favourite shot and why?

– I like the drop shot. It is very difficult to pick up and even if the opponent picks it up, it’s a loose shot and then I can finish it.

Q: What are you doing when you are not training or playing? What are the other things that you like to do apart from playing squash?

– I love to sleep, swim and spend time with my family.This article was originally posted on The Bridge website.