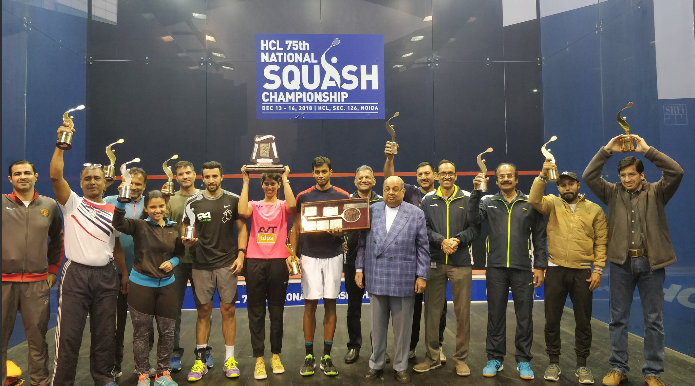 The squash nationals through the eyes of a first-timer

I had hardly known anything about squash. I had seen a bit of it in movies and an occasional glimpse while switching channels on TV, but I was far from being aware of the technicalities of the game.

I had seen a bit of it in movies and an occasional glimpse while switching channels on TV, but I was far from being aware of the technicalities of the game.
That being said, I have always been a sports enthusiast and tried to understand sport as minutely as I can. For I have always believed, that sport is much more than just sport; it’s a way of life. Having played a host of games alongside academics – not that I was any good – I had come to realise what a profound impact sport has on your psyche.

It teaches you how to get along with your fellows. It tells you not to blame the uncontrollable and push yourself to the limit. It makes you immensely positive. While others in your group say ‘No chance, it’s impossible’, you say ‘it’s difficult but I will give it a shot’ because you’ve realised while playing sports that nothing is impossible; just keep your best foot forward and then see how it goes from there on.

Having done my research and after reading a bit about the players taking part in the HCL 75th National Squash Championship, I was now ready to have a firsthand experience of what the sport was all about.

I entered the HCL Campus in Noida, the venue for the tournament. And I must say I liked what I saw. Lush green grass banks, fountains and the buzz around the campus were the things that stood out.

The fixtures on the final day began with the senior players fighting it out. The first round was of the 65 age group. In an age in which some people can hardly walk, seeing the players bustle across the squash court was the best start to the day I could have asked for.

This round was followed by the 60, 55, 50, 45, 40 and 35 age groups. Most of these matches were tight and there came another lesson for me: age is no bar. How happy these players looked is what impressed me the most. After all, this is what sports is – an instrument for human happiness.

It was now time for the real deal – the main draws of the men and women finals of the 75th National Squash Championship. Frankly speaking, rather than being open to the idea of enjoying the country’s best players in action, I wanted the game to show me its complete potential.

And the sport did not disappoint.

The women’s draw was between second seed Urwashi Joshi and top seed Joshana Chinappa; a young 23-year-old player up against a wily 32-year-old 15-time national champion. “I already know what to expect,” I told myself.

After she won the match, Joshana was the centre of attraction when suddenly I noticed Urwashi packing her kitbag and sneaking out of the arena. I could see the devastation inflicted by the loss in her body language.

And that, folks, is another reality of sports. One will win, one will lose; but, how you react in the face of defeat matters much more than how much you cherish your victories.

When the first set went to the top seed Mangaonkar 11-4, it looked as if he would take the match away easily. But Vikram Malhotra fought back in style in the second set, beating Mahesh 15-13.

Gradually the crowd started getting involved. The frequency of the occasional “C’mon Mahesh” and “Go Vikram” began to increase. In a tactical move, Vikram let the third set drift away 2-11 and then stormed back to take the fourth set 11-5.

The marathon fifth set saw both players go neck and neck when around the ten-point mark, Vikram took a two-point lead. Further drama ensued. One moment you saw Vikram throwing away his hands in anguish for a ‘let’ that was not conceded, another moment you saw Mahesh almost begging the umpire to overturn the ‘stroke’ ruled against him.

After as many as five (from memory) championship balls, it was Mahesh who came out victorious 15-13 and Vikram was left shaking his head in disbelief.

For the next five minutes, as Mahesh kept posing for photographs, Vikram kept obliging handshakes with a wry smile to all the ‘tough luck’ consolations that came his way.

A few minutes later, as the dust settled, all the winners and runner-ups posed for a group photo, with wide smiles across their face. Some smiles reflected satisfaction while others failed to hide the hurt deep down. But in that hurt was a steamy resolve to bounce back.

Bravo! I love this squash thing, I said to myself as I left the arena, hoping to be back soon.This article was originally posted on The Bridge website.