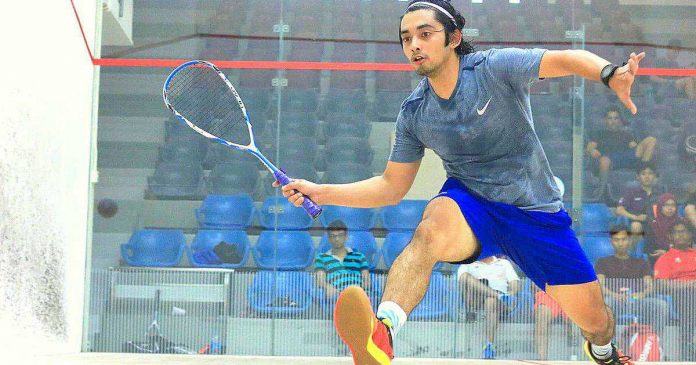 One of the young and talented Indian additions to the Professional Squash Association circuit, Abhishek Pradhan is a spirited individual with a flair for squash. At the HCL 75th National Squash Championship, you could make out where he was from a distance as he stood out with his unique samurai hairstyle.

Pradhan made it to the semi-finals of the HCL 75th National Squash Championship, but with the highest PSA ranking of 315, he knows that he has a long way to go. Here’s an interview of The Bridge with a samurai that’s our own.

Q: Squash might be on the rise in India, but it remains a very uncertain profession. How did you convince yourself that this is a career path that you want to take?

It’s always good to have a backup plan in the form of studies. So I have that kind of thing at the back of my mind that I can go and try this, but if it does not work out, I still have something to fall back on.

I think it is pretty risky to decide this because, in spite of the sport rising in the country, there is not a lot of support to the guys who are just starting to breakthrough.

There is, of course, a lot of support for the people who have already made it. But when people are transitioning, for example, say from the junior to the senior circuit, it’s tough for the guys to take a stand and say okay, this is going to be my focus because in India there is also the pressure of the family that get your studies done with. Once they are done, get yourself a good secure job. So it is definitely tough.

Q: You are 25 now. So what are your immediate goals related to squash? I know that you have around ten good playing years still left in you but do you have any plans of life after squash as yet?

In the long run, I want to stay in squash after my playing career to become a head coach in some country or at a school or college in the US.

Q: What do you think is the reason that top Indian squash players are settling abroad?

If you look at the top eight players, i.e. Harry, Mahesh, Saurav, Vikram, Aditya Jagtap all of them are training abroad because of more opportunities. For example, if you are based in Europe, you can play these leagues on the weekends. You can play the French League, the German League and you can sustain yourself comfortably.

Q: Do you have something on the top of your mind which can help improve squash in India?

After juniors, if anybody is good and promising, talented and hardworking, they can be drafted into the national academy and they get paid a salary, and their expenses are taken care of. They have good physios and fitness coaches. There is help provided for them to travel and play tournaments and train abroad.

If there’s something like this in India, the growth can be exponential because I feel Indians compared to the rest of the word are very talented and very smart but as we are growing as a country, not just in squash, so we have to establish still all this infrastructure to help us grow even faster. So putting in place an effective system will give some strength and stability to Indian squash in the future.This article was originally posted on The Bridge website.