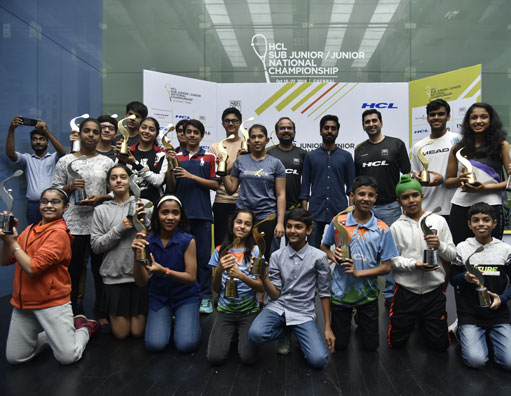 October 22, 2019, Chennai: HCL, a leading global conglomerate, today announced the successful completion of the HCL Indian Sub Junior and Junior National Championship. The seven-day tournament began on 16th October and was hosted at the Indian Squash Academy in Chennai. The winners were felicitated by Arjuna Awardee and noted Table Tennis champion Mr Sathiyan Gnanasekaran. Also present at the event were Mr. Rajat Chandolia, Head of Brand Strategy and Sports Initiatives, HCL Corporation; Mr. Debendranath Sarangi, President, Squash Rackets Federation of India (SRFI) and Mr. Cyrus Poncha, Secretary General, SRFI.
Congratulating the winners, Rajat Chandolia, Head of Brand Strategy and Sports Initiatives, HCL Corporation said, “HCL is invested in promoting Squash in the country and launched the HCL Squash Podium Program in partnership with SRFI, earlier this year, to drive 360-degree development for the sport. We intend to provide the right support at every level in order to significantly improve the performance of players, coaches and referees. I am heartened by the enthusiasm with which these young players have committed themselves to the sport because the future of Indian Squash depends on them. HCL and SRFI’s joint efforts coupled with the passion and dedication of our players will ensure that India registers its name among the greatest Squash playing nations in the world.”
Cyrus Poncha, Secretary General, Squash Rackets Federation of India (SRFI) said, “I would like to congratulate the participants and the winners for their excellent performance. Squash is a very demanding sport – both physically and mentally — and these young players need a lot of guidance in order to improve their game and overall fitness as well as avoid critical injuries. With the support of HCL, we have launched a program that will address these needs of young players and help shape them as the stars of tomorrow. SRFI is committed to see Indian players finish at the podium.”
The HCL Sub-Junior and Junior National Squash Tournament was a seven-star tournament organized under aegis of SRFI and the Tamil Nadu Squash Rackets Association. This PSA satellite event witnessed participation from 780 young players from all parts of the country. The top players of the Championship in the under-17 and Under-19 categories received PSA ranking points.
The Championship was played in a knock-out format across all categories. Here are the details of the winners and runners up.
Category U-19 U-17 U-15 U-13 U-11
Winner – Boys Yash Fadte Neel Joshi Yuvraj Wadhwani
Arihant Ks Darshil Parasrampuria
Runner up – Boys Sankalp Anand Arnaav Sareen Shaurya Bawa Ekambir Singh Aryaveer Dewan
Winner – Girls Sanya Vats Aishwarya Khubchandani
Tiana Parasrampuria
Anahat Singh Akansha Gupta
Runner up – Girls Amira Singh Ananya Dabke Pooja Arthi Diya Yadav Sehar Nayar

About HCL
Founded in 1976 as one of India’s original IT garage start-ups, HCL is a pioneer of modern computing with many firsts to its credit, including the introduction of the 8-bit microprocessor-based computer in 1978 well before its global peers. Today, the HCL Enterprise has a presence across varied sectors that include technology, healthcare and talent management solutions and comprises three companies – HCL Infosystems, HCL Technologies and HCL Healthcare. The enterprise generates annual revenues of over US $8.9 billion with more than 144,000 employees from 140 nationalities operating across 44 countries. For further information, visit www.hcl.com

The Squash Rackets Federation of India (SRFI) was formed to oversee the promotion and development of the sport in India. The SRFI has more than 20 state associations and affiliated units with its headquarters in Chennai. The federation is affiliated to World Squash Federation / Asian Squash Federation & recognized by Government. of India. SRFI has been forging ahead with dynamic plans ensuring promotion, development and performance of the sport at all levels.
For further information, please contact: