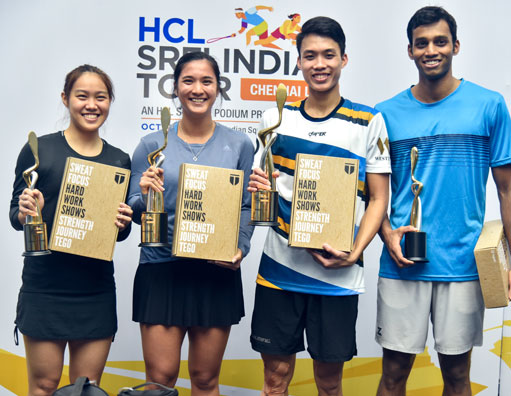 October 17, 2019, New Delhi, India: HCL, a leading global conglomerate, today announced the successful completion of the second leg of the HCL-SRFI India Tour, held at the Indian Squash Academy, Chennai from October 13 to 17. Ivan Yuen from Malaysia won the Championship in the men’s category of $20k; while Rachel Arnold from Malaysia won the women’s event of $12K. The winners were felicitated by Arjuna and Padma Shri Awardee – Mr Vasudevan Baskaran, Indian Hockey Player who was the captain of the Indian team, which won gold medal at the 1980 Summer Olympics in Moscow. Also present at the event were Mr. Sundar Mahalingam, Chief Strategy Officer, HCL; Mr. Debendranath Sarangi, President, Squash Rackets Federation of India (SRFI) and Mr. Cyrus Poncha, Secretary General, SRFI.

Congratulating the winners of the HCL-SRFI India Tour, Sundar Mahalingam, Chief Strategy Officer, HCL Corporation said, “I am delighted to witness the enthusiastic participation of Squash players from across the world in the HCL-SRFI India Tour and their spectacular performance. As we conclude the second leg of HCL-SRFI India Tour here in Chennai, I am happy to share that this tournament along with the previous tournament organized in Greater NOIDA have helped significantly improve the international rankings of Indian players. These tournaments will go a long way towards realizing our goal of nurturing the next-generation of squash stars from India. The next tournament under the HCLSRFI India Tour will be held in Mumbai and I hope to see similar participation there.”

Cyrus Poncha, Secretary General, Squash Rackets Federation of India (SRFI) said, “I would like to congratulate the winners and all the other participants. I am delighted that the Indian players have performed exceptionally well in this event. Aditya Jagta reached the semi finals for the first time and Harinder Pal Singh Siddhu made an excellent comeback after nine months, going down in the semi finals. I truly believe that Indian Squash has a bright future and the stars of tomorrow will emerge from these events. Our association with HCL has been beneficial for the sport and this is the 12th event that we have successfully concluded under our partnership. I am confident that through our combined efforts we will be able to transform the squash ecosystem in India and raise the overall level of the sport in the country.”
The finale match in the men’s category was fought between Ivan Yuen from Malaysia and Mahesh Mangaonkar from India where Ivan Yuen won the title with score 3-2. In the women’s category Rachel Arnold from Malaysia beat Li Lai from Malaysia with score 3-1.

About HCL
Founded in 1976 as one of India’s original IT garage start-ups, HCL is a pioneer of modern computing with many firsts to its credit, including the introduction of the 8-bit microprocessor-based computer in 1978 well before its global peers. Today, the HCL Enterprise has a presence across varied sectors that include technology, healthcare and talent management solutions and comprises three companies – HCL Infosystems, HCL Technologies and HCL

Healthcare. The enterprise generates annual revenues of over US $8.9 billion with more than 144,000 employees from 140 nationalities operating across 44 countries. For further information, visit www.hcl.com