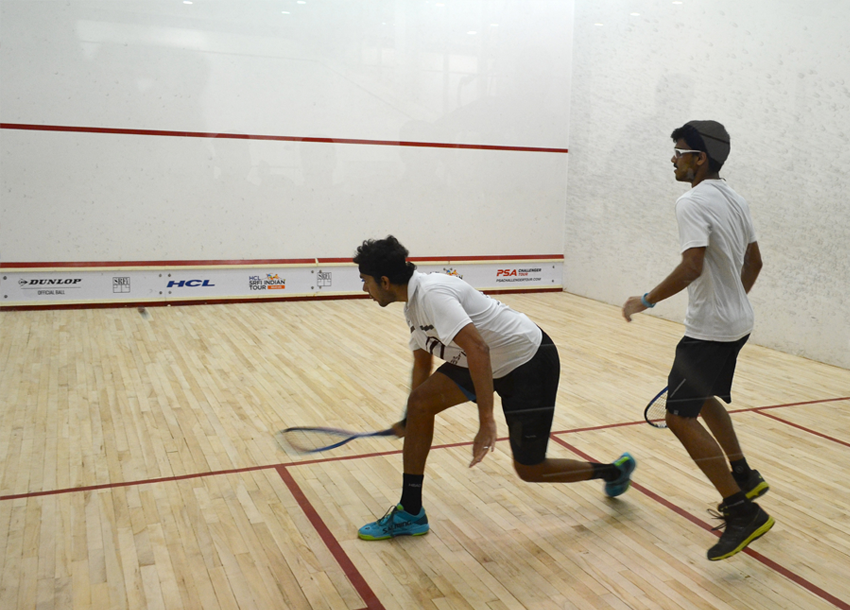 Vikram Malhotra from India win the men’s event in the $12k category
Meena Hamed from Egypt wins the women’s event in the $6k category
The Squash tournament spanning five days saw players from 11 countries battle for the title
August 27, 2019, New Delhi, India: HCL, a leading global conglomerate, today announced the
successful completion of the Delhi leg of the HCL-SRFI India Tour held from August 23-27 at Jaypee
Greens Stadium at Greater Noida. Vikram Malhotra won the Squash championship in the men’s
category of $12k; while Meena Hamed from Egypt won the women’s event of $6K.
Congratulating the winners of the HCL-SRFI India Tour, Sundar Mahalingam, Chief Strategy Officer,
HCL Corporation said, “I am happy to see the spectacular performance of all the participating players.
The level of the game played here makes me certain that tournaments like these are the key to
nurturing future Indian Squash stars. The HCL-SRFI India Tour is a key initiative under the HCL Squash
Podium Program, which is our joint effort with SRFI aiming to transform the Indian squash ecosystem
and give our players the opportunity to improve their international ranking by playing more
tournaments. Our ultimate goal is to ensure that we are able to support Indian players to finish at the
podium.”
Cyrus Poncha, Secretary General, Squash Rackets Federation of India (SRFI) said, “I would like to
congratulate the winners and all the other participants. I am delighted that the Indians have performed
exceptionally well in this event winning 1 Gold and 2 Silvers. I truly believe that Indian Squash has a
bright future and the stars of tomorrow will emerge from these events. With the successful completion
of the first leg of the HCL-SRFI India Tour, we are now looking forward to the second PSA Championship
to be organized in Chennai. Our association with HCL has been truly beneficial for the sport and I am
confident that through our combined efforts we will enable will be help nurture talented young
players.”
In a riveting match that lasted 42 minutes and was fought between two Indian players, Vikram
Malhotra defeated Aditya Jagtap (11-6), (6-11), (11-6) and (11-5), winning the title in the men’s
category. Meanwhile the women’s finale lasted 36 minutes; wherein Meena Hamed emerged
victorious after defeating Sunayna Kuruvilla in (11-9), (11-4) and (11-6). The winner of the women’s
event will find direct entry into the World Squash Championship to be held in Egypt in October this
year.
The winners were felicitated by ace Badminton player and Arjuna Award Winner Ms Nelakurihi Sikki
Reddy. She started playing Badminton at the age of nine and has won many awards and accolades in
the Mixed Doubles category with her partner Mr Pranaav Jerry Chopra. She won Gold in the
Commonwealth Games, SAF Games and Syed Modi Grand Prix; and Bronze each in the Asian Games,
Japan Super Series and Uber Cup.
Note to Editor:
About HCL
Founded in 1976 as one of India’s original IT garage start-ups, HCL is a pioneer of modern computing
with many firsts to its credit, including the introduction of the 8-bit microprocessor-based computer in
1978 well before its global peers. Today, the HCL Enterprise has a presence across varied sectors that
include technology, healthcare and talent management solutions and comprises three companies –
HCL Infosystems, HCL Technologies and HCL Healthcare. The enterprise generates annual revenues of
over US $8.9 billion with more than 144,000 employees from 140 nationalities operating across 44
countries. For further information, visit www.hcl.com
About SRFI
The Squash Rackets Federation of India (SRFI) was formed to oversee the promotion and development
of the sport in India. The SRFI has more than 20 state associations and affiliated units with its
headquarters in Chennai. The federation is affiliated to World Squash Federation / Asian Squash
Federation & recognized by Government. of India.
SRFI has been forging ahead with dynamic plans ensuring promotion, development and performance
of the sport at all levels.
For further information, please contact:
On behalf of HCL:
Sadaf Khan – 09620696668/ sadaf-k@hcl.com