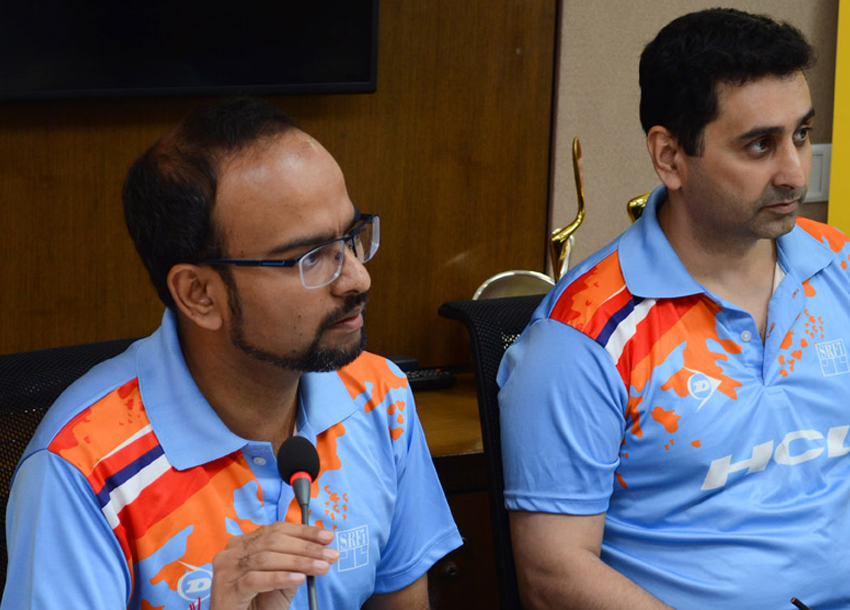 Delhi, August 22, 2019: HCL, a leading global conglomerate, today announced the launch of the HCL-SRFI India Tour, under the HCL Squash Podium Program. The multi-city PSA Challenger tour in the country will giving the Indian players an opportunity to compete against the world’s best at the home turf. HCL and SRFI plan to organize four PSA tournaments across four cities in India, starting with a tournament at the Jaypee Greens Stadium at Greater Noida on August 23. This tournament will witness participation from top Indian players and international players from seven countries.

While PSA tournaments have been hosted in India earlier at $50K or $30K level, this level of tournament (with prize money of $12K for men and $6K for women) is taking place in the country after a gap of several years. It will offer a wider range of Indian players, who otherwise have to travel internationally to participate in such tournaments, an opportunity to improve their game and PSA ranking.

The HCL Squash Podium Program was launched in May 2019 by HCL in partnership with the Squash Rackets Federation of India (SRFI) to significantly improve the Squash ecosystem in the country. The multi-pronged program is focusing on driving a 360-degree overhaul in Indian Squash by improving both player (senior and junior) and coaching standards and enhancing the overall prominence of the sport in the country.

Talking aboutthe HCL Squash Podium Program, Rajat Chandolia, Head of Brand Strategy and Sports Initiatives, HCL Corporation said, “HCL’s core brand philosophy is to touch lives and therefore we invest in fields that will benefit and reach the maximum number of audiences. Sports as a category connects people across age groups regardless of whether they play a particular sport themselves or not. And we specifically pick up sports which do not receive organized institutional backing– Squash in one such game.HCL’s support to Squash started three years back and we are now strengthening our commitment with the aim of significantly enhancing the existing Squash ecosystem in the country. Our ultimate goal is to ensure that we are able to support Indian players to finish at the podium.”

Cyrus Poncha, Secretary General,SRFI said, “Indian Squash in gaining a lot of attention with players like JoshnaChinappa and Saurav Ghoshal securing important international wins for the country. However, as a nation it is imperative that we invest in nurturing the next generation stars of Squash to ensure that Indian Squash not only continues its success but emerges at the top. With HCL, we have found common synergies in terms of our goals for Indian Squash. I am confident that through our combined efforts we will enable will be help our country take its rightful place in the pantheon of great squash playing nations.”

HCLhasbeen supporting Squash in the country for over three years now and has been organizing HCL Junior Squash tournament since 2016. HCL scaled-up its efforts by partnering with SRFI to organize the HCL Senior National Squash Championship in 2017 and again in 2018.As part of the HCL Squash Podium program, HCL has already hosted a High-Performance camp in June with the help of SRFI. This camp provided intensive training to 32 junior players, who were selected to represent India at the Asian and World Championships under British coach – Chris Ryder. Going Forward, HCL and SRFI will also host another High Performance Camp, Referee Clinics and training camps for coaches.

Founded in 1976 as one of India’s original IT garage start-ups, HCL is a pioneer of modern computing with many firsts to its credit, including the introduction of the 8-bit microprocessor-based computer in 1978 well before its global peers. Today, the HCL Enterprise has a presence across varied sectors that include technology, healthcare and talent management solutions and comprises three companies – HCL Infosystems, HCL Technologies and HCL Healthcare. The enterprise generates annual revenues of over US $8.9  billion with more than 144,000 employees from 140 nationalities operating across 44countries. For further information, visit www.hcl.com

The Squash Rackets Federation of India (SRFI) was formed to oversee the promotion and development of the sport in India. The SRFI has more than 20 state associations and affiliated units with its headquarters in Chennai. The federation is affiliated to World Squash Federation / Asian Squash Federation &recognized by Government. of India.

SRFI has been forging ahead with dynamic plans ensuring promotion, development and performance of the sport at all levels.

On behalf of HCL: