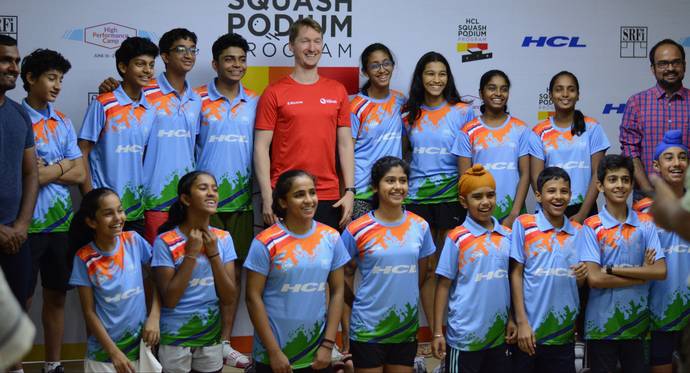 British squash coach Chris Ryder was impressed with the enthusiasm and fine attitude of the India’s junior players during a high performance camp in the Shiv Nadar University here on Thursday.

A professional player who had competed against Saurav Ghosal among other Indians, Chris Ryder took up coaching in 2014.

“I enjoy coaching the juniors. I have full attention of the players, they are fully engaged. This camp is for the top four in each age group. We can have national level camps in future, so that the best players get together and train in a non-competitive atmosphere. It is important for players to help each other grow”, he said.

Constantly interacting with the players in four courts during a four-hour morning session divided into two groups of eight players each, Chris stressed the theory of “create, capitalise and convert”, to the players. It was all about the art of setting up a point and attacking at the right time.

“Unlike badminton or tennis, squash is a complicated game. It is important to put things in a simple way, but understand the complexity”, said Chris as he explained his methods to Sportstar.

To the players, he highlighted the importance of blending defence and attack.

“They are already good players. Indian juniors have been world class for the last so many years. Our aim is to prepare for the Asian and World championships, and also give them long-term ideas about different styes of coaching”, he said.

The British coach who works for the national junior team in England when he’s not running his club, said that he was focused on strategy, movement and technique of the players, leaving the fitness aspect to the experts.

The camp was planned with the help of scientific study of players’ physical traits and efficient utilisation of the expertise of the British coach.

“It is important to prevent injuries. The experts study the core strength of each player and the specific requirements of the different parts of the body for the sport. The dietician is taking care of the food requirements”, said Rajat Chandolia, who, as the head of operations for branding and marketing in HCL, is looking after the HCL Podium program for squash.

The soft-spoken British coach felt that the game was growing very well around the world, and the world class television coverage along with live streaming of events on the web would take the game to a different level.