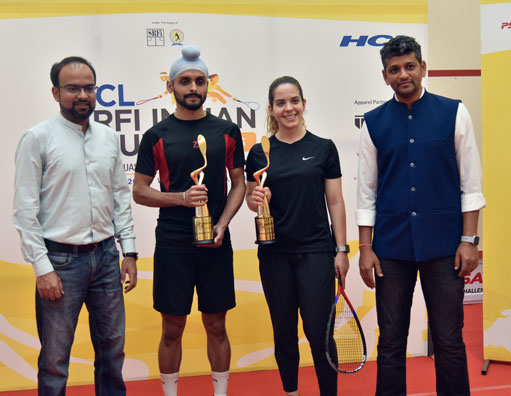 December 21, 2019, Mumbai, India: HCL, a leading global conglomerate, today announced the successful completion of the third leg of the HCL-SRFI India Tour. The five-day tournament was held at the Willingdon Sports Club, Mumbai from December 17 to 21 and saw participation of approximately 50 players from 10 countries. Harinder Pal Singh from India won the Championship in the men’s category of $20k; while Hana Ramadan from Egypt won the women’s event of $12K. The winners were felicitated by Chief Guest, Amol Mazumdar, one of the most prolific Ranji players in India.

Congratulating the winners of the HCL-SRFI India Tour, Rajat Chandolia, Head of Brand Initiatives, HCL Corporation said, “When HCL started supporting Squash, our vision was to popularize the game and ensure that Indian players were ready for the International podium. I believe that the HCL Squash Podium Program, which was conceptualized in partnership with SRFI, has started to drive visible impact towards realizing that goal. The HCL—SRFI India Tour, for example, has helped Indian players improve their international rankings, while playing from their home ground.”
Cyrus Poncha, Secretary General, Squash Rackets Federation of India (SRFI) said, “I am extremely delighted with the performance of Abhshikek Agarwal who was a wild card entry but played very well and made it to the semi-finals. I would also like to congratulate Harinder for his brilliant performance and his first tournament win in the 20k category. This was a very eventful tournament, where all the top seeds lost early and the younger players performed exceptionally well. Not just in India, but even in tournaments abroad, the Indian squash players are setting new benchmarks of success and I am confident that the future of Indian Squash is very bright. Our association with HCL has been beneficial for the sport and this is the 13th event that we have successfully concluded under our partnership.”
The finale match in the men’s category was fought between Harinder Pal Singh Sandhu from India and Tomotaka Endo from Japan where Harinder won the title with score of 3-0 in a match that lasted for 30 minutes. In the women’s category Hana Ramadan from Egypt beat Lucy Turmel from England with a 3-1 score in a match lasting 51 minutes.

About HCL
Founded in 1976 as one of India’s original IT garage start-ups, HCL is a pioneer of modern computing with many firsts to its credit, including the introduction of the 8-bit microprocessor-based computer in 1978 well before its global peers. Today, the HCL Enterprise has a presence across varied sectors that include technology, healthcare and talent management solutions and comprises three companies – HCL Infosystems, HCL Technologies and HCL Healthcare. The enterprise generates annual revenues of over US $9.3 billion with more than 147,000 employees from 140 nationalities operating across 44 countries. For further information, visit www.hcl.com