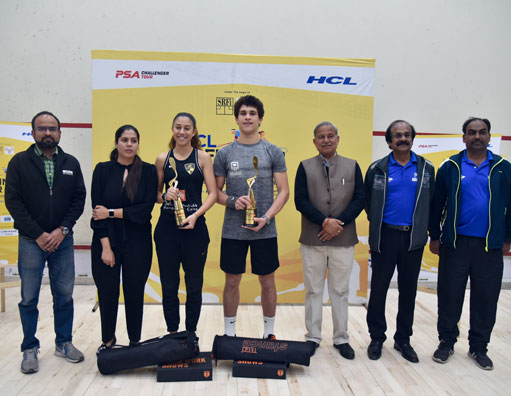 The HCL—SRFI India Tour (Jaipur leg) was an initiative under the HCL Squash Podium
Program aimed at transforming India’s squash ecosystem
The four-day tournament witnessed participation from nine countries
February 02, 2020, Jaipur, India: HCL, a leading global conglomerate, today announced the successful
completion of the fourth leg of the HCL-SRFI India Tour. The four-day tournament was held at the
Rajasthan Squash Academy, Sawai Man Singh Stadium from January 30 till February 02 and saw
participation from over 50 players from nine countries. Ibrahim Elkabbani from Egypt won the
Championship in the men’s category of $6k; while Jana Shiha from Egypt won the women’s event of
$12K. The winners were felicitated by Chief Guest, Dr Subhash Garg, Minister Higher Education, Govt.
of Rajasthan.
Congratulating the winners of the HCL-SRFI India Tour, Rajat Chandolia, Head of Brand Initiatives,
HCL Corporation said, “I believe that the HCL Squash Podium Program, which was conceptualized in
partnership with SRFI, has started having a positive impact on the PSA rankings of Indian players, as
they are now able to play more matches on their home turf. Conducting international-grade
tournaments is however, one part of HCL’s larger efforts to re-envision the entire Squash ecosystem in
the country. I am hopeful that HCL and SRFI’s continued partnership will create a platform to catapult
talented Indian Players into the international stage.”
Cyrus Poncha, Secretary General, Squash Rackets Federation of India (SRFI) said, “I would like to
congratulate all the players on their brilliant performances. Not just in India, but even in tournaments
abroad, the Indian squash players are setting new benchmarks of success and I am confident that the
future of Indian Squash is very bright. Our association with HCL has been beneficial for the sport
and this is the 14th event that we have successfully concluded under our partnership.”
The finale match in the men’s category was fought between Abhishek Pradhan from India and Ibrahim
Elkabbani from Egypt where Ibrahim won the title with score of 3-1 in a match that lasted for 38
minutes. In the women’s category Jana Shiha from Egypt beat Salma Eltayeb from Egypt with a 3-1
score in a match that lasted 30 minutes.
Note to Editor:
About HCL
Founded in 1976 as one of India’s original IT garage start-ups, HCL is a pioneer of modern computing with many
firsts to its credit, including the introduction of the 8-bit microprocessor-based computer in 1978 well before its
global peers. Today, the HCL enterprise has a presence across varied sectors that include technology, healthcare
and talent management solutions and comprises three companies – HCL Infosystems, HCL Technologies and HCL
Healthcare. The enterprise generates annual revenues of over US $ 9.6 billion with more than 149,000 employees
from 140 nationalities operating across 45 countries. For further information, visit www.hcl.com
About SRFI
The Squash Rackets Federation of India (SRFI) was formed to oversee the promotion and development of the
sport in India. The SRFI has more than 20 state associations and affiliated units with its headquarters in Chennai.
The federation is affiliated to World Squash Federation / Asian Squash Federation & recognized by Government.
of India. SRFI has been forging ahead with dynamic plans ensuring promotion, development and performance of
the sport at all levels.
For further information, please contact:
On behalf of HCL:
Sadaf Khan – 09620696668/ sadaf-k@hcl.com