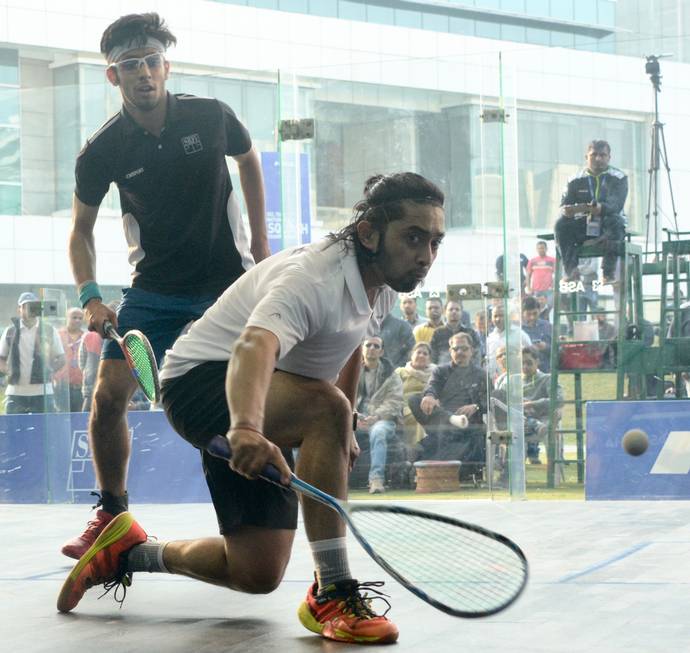 Abhishek Pradhan overcame a stiff start to beat Saksham Choudhary 11-13, 11-5, 11-6, 11-4 in the men’s quarterfinals of the HCL 75th National Squash Championship at the HCL Hub here on Friday.

In an entertaining contest, it was the fitness and sharp game of Abhishek that came to the fore as the match progressed.

The sure footing and touch of assurance was natural, as Abhsihek had trained in Barcelona for six weeks under coach Victor Montserrat, specifically for the national championship. Abhishek has turned a full time squash player after having graduated from the US.

In the semifinals, Abhishek will challenge the top seed and childhood friend Mahesh Mangaonkar.

“We have grown up together, studying in the Don Bosco School in Mumbai. As a junior I had beaten him. He is much better now and it should be an interesting contest,” said Abhishek.

The other semifinal will feature the second seed and title aspirant Harinder Pal Singh Sandhu against Vikram Malhotra.

Both Harinder, who had won the national title in 2014, beating Saurav Ghosal, and Vikram, got past tricky opponents in tough four games each.

It was an interesting sight as Vikas Mehra was talking to the umpire about getting a walkover, as there was no trace of Harinder at the arena, till the scheduled start of the match at 4.20 p.m. It was then, Harinder walked in and played a fluent game, even as Vikas pulled off the fourth game to show his efficiency.

“I was training in the gym inside. It is too cold outside. Actually, it was cold and windy inside the court as well,” said Harinder, quite an all-round player with supreme fitness. He did not like to look too far ahead, and said that he would take one match at a time.

Vikram Malhtora was quite explosive after a slow start, as he outplayed Gaurav Nandrajog.

In the women’s section, top seed Joshna Chinappa, looking to equal Bhuvaneshwari Kumari’s record of 16 national titles, and watched by the ace herself from the front row, handled the enthusiastic Tanvi Khanna in a keen fight. In the semifinals, Joshna will be challenged by Sachika Balvani who fought past the left-hander, Sanya Vats.

The other semifinal will feature, second seed Urwashi Joshi against Aparajitha Balamurukan.