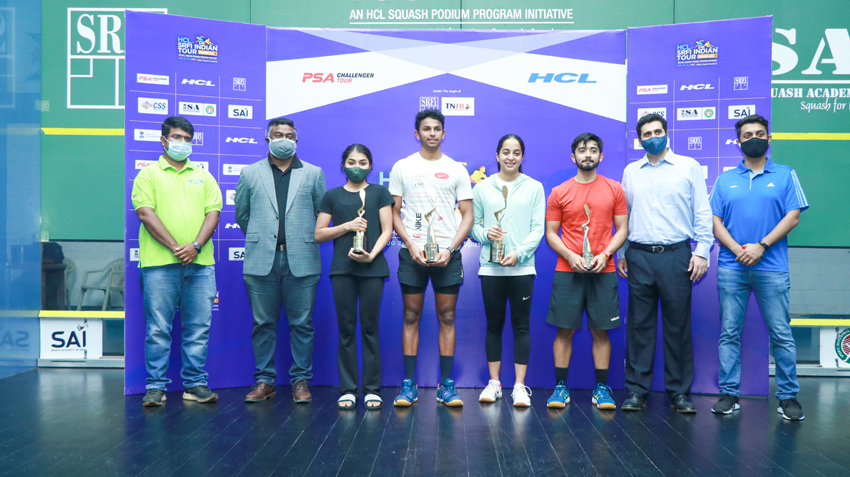 Chennai, August 26, 2021: HCL, a leading global conglomerate, today announced the successful completion of theHCL-SRFI Indian Tour, held at the Indian Squash Academy, Chennai. The four-day tour, which started on August 23, saw participation from47players from across the country. Velavan Senthilkumar won the Championship in the men’s category of $12K; while Tanvi Khanna won in the women’s category of $12K. The winners were felicitated by Arun Rajendran, Country Head, Malaysia, HCL Technologies and Cyrus Poncha, Secretary-General, ‎Squash Rackets Federation of India (SRFI).This is the third edition of the Tour in Chennai, with earlier Championships held in March 2021 and October 2019. The Championship was hosted with the support of the Ministry of Youth Affairs and Sports and Sports Authority of India. Due to the ongoing pandemic, the matches were hosted following bio-bubble protocols with only Indian players as participants to ensure player safety.

This HCL SRFI Indian Tour was organized to help the Indian players benefit from PSA’s new guidelines that allow players to score global ranking points even if they participate in a domestic tour. This event and similar platforms can help bridge the world ranking difference between Indian players and top-ranking international players and can assist Indian players transit into PSA (pro).

Congratulating the winners, Sundar Mahalingam, President- Strategy at HCL Corporation said, “HCL SRFI Indian Tour is part of the HCL Squash Podium program, aimed at improving the Squash ecosystem in our country. This is our second Championship during the pandemic and sixth PSA since the launch of the program in 2019. We are thankful to the sports bodies for their support towards hosting the Championships even during the pandemic as these play an important role towards helping domestic players hone their skills and earn precious ranking points.”

Cyrus Poncha, Secretary-General, ‎Squash Rackets Federation of India (SRFI) said, “It was heartening to see an enthusiastic response to the third leg of the HCL-SRFI Indian Tour. We saw 23 new faces this time who put their best foot forward in a closely contested Championship. Through our joint efforts with HCL, we hope to transform the squash ecosystem in India and raise the overall level of the sport in the country and the HCL SRFI Indian Tour is a key component of these efforts”.

To ensure that squash enthusiasts do not miss out on the opportunity to see their favorite players in action, all matches were streamed live on the YouTube channel of India Squash.

Founded in 1976 as one of India’s original IT garage start-ups, HCL is a pioneer of modern computing with many firsts to its credit, including the introduction of the 8-bit microprocessor-based computer in 1978 well before its global peers. Today, the HCL enterprise has a presence across varied sectors that include technology, healthcare and talent management solutions and comprises three companies – HCL Infosystems, HCL Technologies and HCL Healthcare. The enterprise generates annual revenues of over US $ 10.5 billion with more than 176,000 employees operating across 50 countries. For further information, visit www.hcl.com

On behalf of HCL: