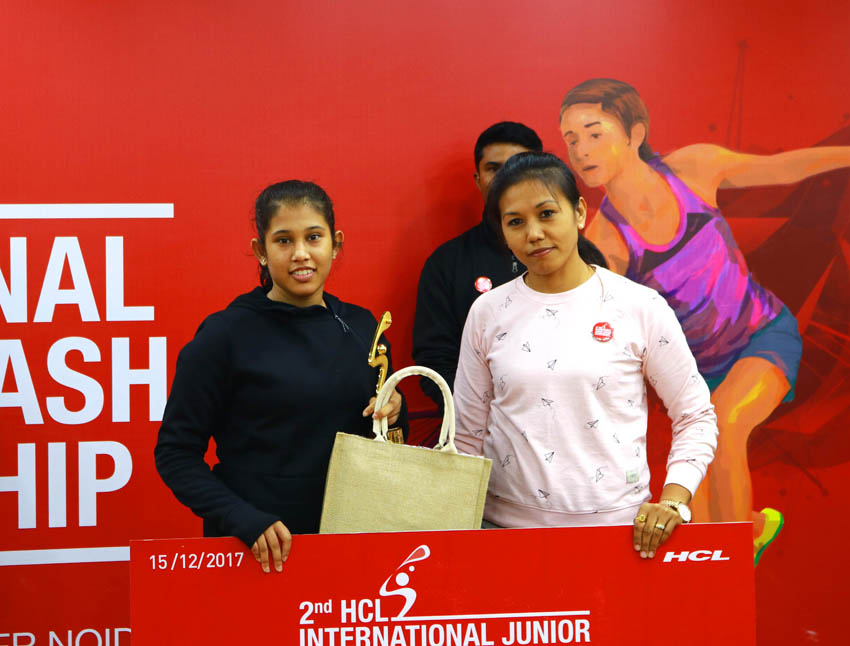 Aryan Parekh won the U-19 category for Boys Sanya Vats and Sankalp Anand won the U-17 category for Girls and Boys, respectively Aishwarya Khubchandani and Aryan Khandelwal won the U-15 category for Girls and Boys,
respectively
Aasya Patel and Yuvraj Wadhwani won the U-13 category for Girls and Boys, respectively
Anahat Singh and Ekambir Singh won the U-11 category for Girls and Boys, respectively
15 December 2017, Great Noida, India: HCL, a leading global conglomerate, today announced the
successful conclusion of the 2nd HCL International Junior Squash championship – a Silver event under
the Asian Squash Federation (ASF) calendar, rated five star by the Squash Racket Federation of India
(SRFI). Hosted at the Shiv Nadar University, Greater Noida, this 5-day championship is one of the
highest-level tournaments in the country. The winners were felicitated by Arjuna award winner
Bombayla Devi Laishram, a celebrated Indian archer with a total prize purse of INR 5,49,000 across
all categories.
The top players will receive ranking points for the matches played during this tournament, which will
add up to determine their Asian ranking in the relevant age group. The Championship, which saw a
participation from 261 players, was organised under the aegis of The Squash Racket Federation of
India and the Uttar Pradesh Squash Rackets Association to promote the sport at a competitive level.
Sundar Mahalingam, Chief Strategy Officer, HCL Corporation and Shiv Nadar Foundation said,” I
would like to congratulate all the players for their outstanding performance and hope that they will
keep practicing so that next year the quality of their game is raised further. This is the second time
HCL has organized the Junior Squash Championship in order to promote the sport in our country.
HCL’s brand philosophy is to touch people’s lives in ways that can have a transformative effect on
their journey. We aim to continue supporting Squash as a sport in India in collaboration with SRFI.”
Harish Prasad, National Squash Development Officer at Squash Rackets Federation of India (SRFI)
said, “It is always wonderful to see such young players walk into the court with the determination to
show their best game. It was a great experience seeing these young talents battle each other for the
title. Like always, HCL supported us with excellent facilities and helped us throughout to conduct the
Championship in an efficient and time bound manner.”
The Championship was played in a knockout format followed by play-offs of the top 8 positions in all
categories. The details of the winners and runners up are as follows:
Category BU19 BU17 GU17 BU15 GU15 BU13 GU13 BU11 GU11
Winner Aryan
Parekh
Sankalp
Anand
Sanya
Vats
Aryan
Khandel
wal
Aishwarya
Khubchand
ani
Yuvraj
Wadhw
ani
Aasya
Patel
Ekambir
Singh
Anahat
Singh
Runner-up Rahul
Baitha
Prithvi
Singh
Amira
Singh
Jay
Vaknalli
Diksha
Aurobindo
Rutva
Samant
Kaavya
Bansal
Gurveer
Singh
Unnati
Tripathi
About HCL
Founded in 1976 as one of India’s original IT garage start-ups, HCL is a pioneer of modern computing
with many firsts to its credit, including the introduction of the 8-bit microprocessor-based computer
in 1978 well before its global peers. Today, the HCL Enterprise has a presence across varied sectors
that include technology, healthcare and talent management solutions and comprises three
companies – HCL Infosystems, HCL Technologies and HCL Healthcare. The enterprise generates
annual revenues of over US $7.5 billion with more than 120,000 employees from 140 nationalities
operating across 39 countries, including over 500 points of presence in India.