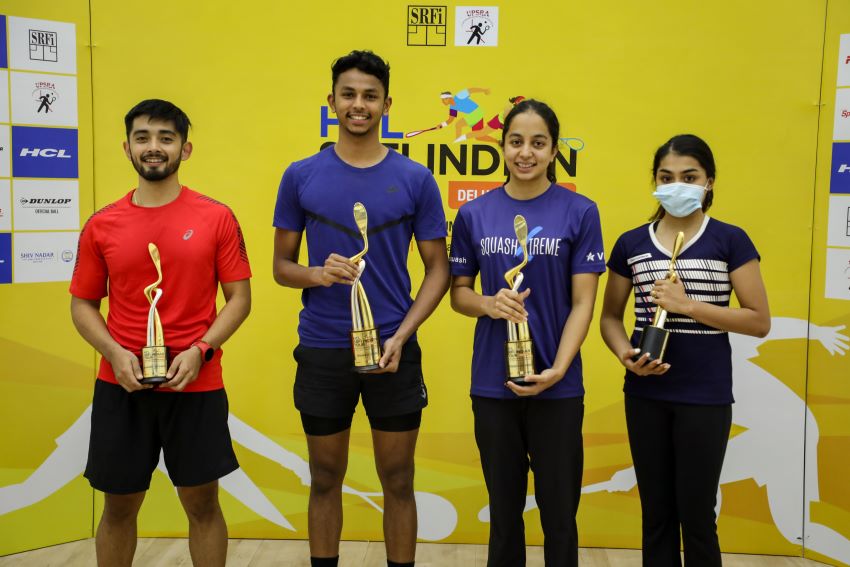 The HCL Squash Podium Program was launched in 2019 by HCL in partnership with SRFI to significantly improve the Squash ecosystem in the country. The first PSA tournament under this program was also held in Delhi NCR in August 2019. Since then, PSA Tours have been hosted across Chennai, Mumbai and Jaipur.

Winner of the Women’s category, Tanvi Khanna (World Rank 86) said, “It’s been absolutely amazing playing two challenger events within a span of two weeks as part of HCL-SRFI PSA Tour. This was yet another crucial match against Sunayna and I thoroughly enjoyed playing against her at this stage. The squash complex at Shiv Nadar University is one of the best in the country and it’s an incredible venue for a PSA event! I am excited about how my ranking has improved with these domestic PSA tournaments and I am looking forward to competing in more such events outside India in the near future.”

Velavan Senthilkumar (World Rank 111), Winner of the Men’s category said, “I would like to thank HCL and SRFI for organizing these PSA events in this pandemic. Proper COVID-19 protocols were followed for all players so that there was a safe and comfortable environment to compete in. This tournament and the last one that happened in Chennai have helped me earn crucial PSA ranking points and improve my world rankings. Not just the rankings, these tournaments have given me the confidence and the match play that I truly needed.“

Congratulating the winners, Rajat Chandolia, Head of Brand and Marketing at HCL said, “I was thrilled to see the spectacular performances of all the players which truly demonstrated their astounding range and skill. The HCL SFRI PSA tournaments are crucial as they help enhance our players’ match skills and also contribute to their rankings. At HCL, we are committed to improving the squash ecosystem in our country and will continue to work with SRFI to design and implement efforts in that direction.”

Cyrus Poncha, Secretary General of Squash Rackets Federation of India said, “My heartiest congratulations to all the winners of this prestigious tournament. The PSA tour is one of the strategic programs conceptualized and run jointly with HCL to develop Indian talent in the game and it was great to see the form displayed by many of our players in this tournament. The HCL-SRFI India Tour is a chance for people to see the world’s best squash players in action with India’s best, and experience the sport being played at the very highest level. We are grateful to the Shiv Nadar University Delhi NCR for being a great host and providing an amazing squash venue.”

To ensure that squash enthusiasts do not miss out on the opportunity to see their favorite players in action, all matches were streamed live on the YouTube channel of India Squash and HCL Enterprise.

Founded in 1976 as one of India’s original IT garage start-ups, HCL is a pioneer of modern computing with many firsts to its credit, including the introduction of the 8-bit microprocessor-based computer in 1978 well before its global peers. Today, the HCL enterprise has a presence across varied sectors that include technology, healthcare and talent management solutions and comprises three companies – HCL Infosystems, HCL Technologies and HCL Healthcare. The enterprise generates annual revenues of over US $ 10.5 billion with more than 176,000 employees operating across 50 countries. For further information, visit www.hcl.com

The Squash Rackets Federation of India (SRFI) was formed to oversee the promotion and development of the sport in India. The SRFI has more than 20 state associations and affiliated units with its headquarters in Chennai. The federation is affiliated to World Squash Federation / Asian Squash Federation & recognized by Government. of India.

SRFI has been forging ahead with dynamic plans ensuring promotion, development and performance of the sport at all levels.