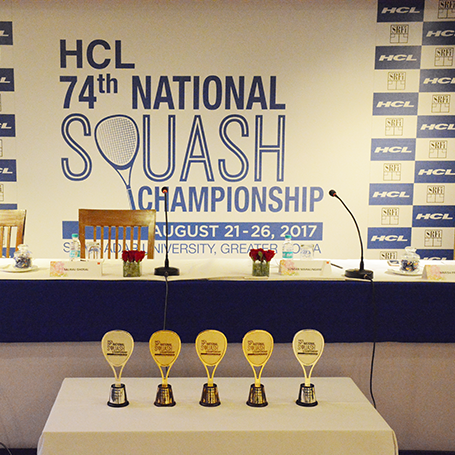 Highest number of entries with participation from top national players like Joshna
Chinappa, Saurav Ghosal and several others
August 22, 2017, Delhi, India: HCL, a leading global conglomerate, today announced the
launch of HCL 74th National Squash Championship. The main draws will be held from
August 23 – 26, 2017 at the Shiv Nadar University, Greater Noida. The Championship is part
of HCL’s efforts to promote Squash in the country and create platforms that allow the
country’s talented players to hone their skills. The Championship will witness participation
from over 550 players across categories, which is the highest number for any squash
tournament in the country, till date.
This seven-star Championship, which is considered as the highest rated tournament, will be
organised under the aegis of the Squash Rackets Federation of India (SRFI) and the U.P.
Squash Rackets Association. The Championship will be open to both, Men and Women in
separate categories. Matches will also take place in other categories including Professional
Coach, and over/35, over/40, over/45, over/50, over/55, over/60 for men only. The
Championship will follow a knock-out format where top 8 players will get the prize money in
Men, Women and Professional Coach Categories; while only winners and runners-up will be
awarded in the six other categories. The top players will receive ranking points and will be
included in the National ranking list in the relevant age group.
Arjuna Awardee Saurav Ghosal, India Rank No 1 and World Rank No. 27 said, “SRFI
has been supporting players like me for many year now and I am glad corporates like HCL
are also coming forward towards a common goal. Partnerships such as these build a sense
of confidence that the future of the sport looks bright in our country. I am sure serious
Squash players will be able to benefit immensely from such platforms.” Joshna Chinappa, India Rank No 1 and World Rank No. 14 and also an Arjuna
Awardee said, “It is a real pleasure to be part of HCL 74th National Squash Championship,
which is being organised under the aegis of SRFI. Over the past few years now, the sport
has started getting recognized at a national level and that has led to a greater support
system being created for players to pursue the sport seriously. Indian players have now
started making their presence felt at an international level too which is a significant
achievement for this otherwise niche sport. At a personal level, I am looking forward to play
my best game and give a tough fight to my talented co-players at this prestigious platform.” Speaking on the initiative, Sundar Mahalingam, Chief Strategy Officer, HCL Corporation
said, “With our philosophy of touching people’s lives, we at HCL believe in creating a
sustainable ecosystem to promote a variety of sports in the country. Squash is one such
sport that we have been supporting and we launched our first Junior Squash tournament in
December 2016, which was well received by the players. To scale-up our efforts towards the
game, we have partnered with SRFI to organize the HCL 74th National Squash
Championship this year and have received over 550 entries, the highest till date for this
tournament.” Harish Prasad, National Squash Development Officer at ‎ Squash Rackets Federation
of India (SRFI) said, “It is our pleasure to partner with HCL for the National Squash
Championship and I am happy to say that we have found common synergies in this
partnership to promote this niche sport in the country. We hope to continue our association
with HCL to nurture the talented squash players of our country and provide them with
competitive platforms at both national and international level.” Besides the 74th National Squash Championship, HCL will be hosting the second edition of
the HCL Junior Squash Championship in December this year.
About HCL
Founded in 1976 as one of India’s original IT garage start-ups, HCL is a pioneer of modern computing with
many firsts to its credit, including the introduction of the 8-bit microprocessor-based computer in 1978 well
before its global peers. Today, the HCL enterprise has a presence across varied sectors that include
technology, healthcare and talent management solutions and comprises four companies – HCL Infosystems,
HCL Technologies, HCL Healthcare and HCL TalentCare. The enterprise generates annual revenues of
over US $7.5 billion with more than 120,000 employees from 140 nationalities operating across 32
countries, including over 500 points of presence in India. For further information, visit www.hcl.com.